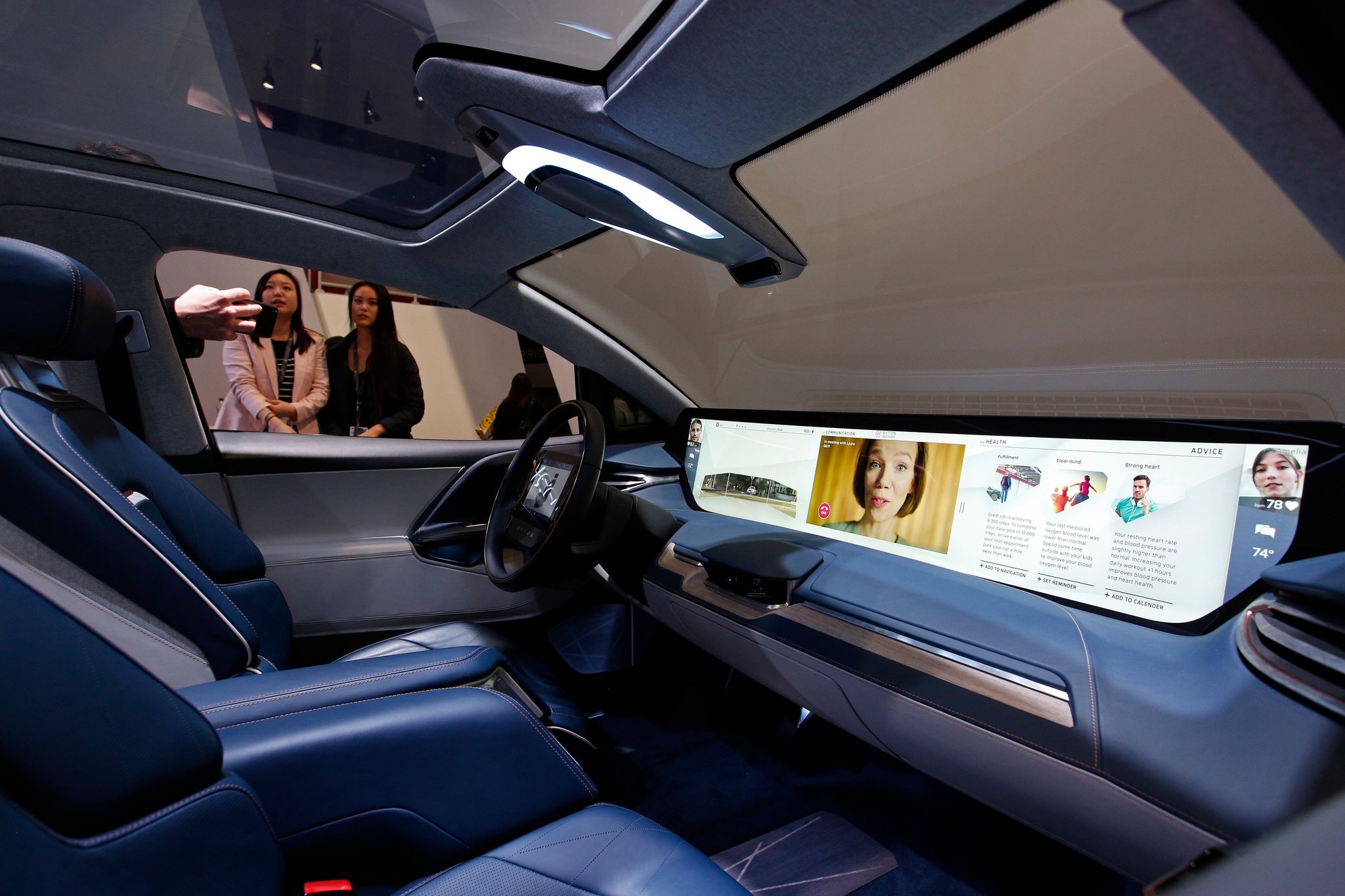 Two New Cars, Designed from the Inside Out

Byton and Canoo offer radically distinct approaches to the way cars work for their owners. Canoo even does away with the idea of ownership.  In Silicon Valley, it’s not so unusual to get a sneak peek of tech products with revolutionary potential. On a Saturday afternoon early this year, eight beta testers gathered to experience a novel piece of electronic equipment: a digital screen embedded in the entire width of a car’s dashboard, from one pillar to the other.

The vehicle, the all-electric Byton M-Byte S.U.V., will debut in China this year before arriving in the United States in 2021. Its key feature is what Byton calls the M-Byte Stage, a screen 9.5 inches high and 4 feet wide that turns commuting into an immersive media experience.

For generations, car designers started a new model by sketching a sensual line. But Byton turned the design process inside-out. “From Day 1, everything for the M-Byte was designed around the screen,” said Florian Baur, director of product management for Byton, a Chinese start-up with an engineering office about seven miles from where Apple designs its products.

Besides a digital takeover of the dashboard, Byton’s electric S.U.V. has a touch-screen built into the steering wheel, a tablet in the center console and two more screens in the back of headrests for second-row viewers. What appears on the screens is controlled by a combination of voice, touch-screen buttons, hand gestures, hardware knobs and the driver’s eye movements captured by a camera.

“Now you can jump inside your phone,” said one of the volunteer testers, Daniel Theade, a professional rigger for live events and productions who was in the market for an E.V.

“I’ll no longer pull out my master communications device on this little screen here,” he said, pointing to his phone. “Now you sit in your car, and you’re in the matrix.”

The M-Byte also happens to be an automobile, offering up to 402 horsepower and nearly 300 miles of driving range on a single charge. It was designed by Benoit Jacob, Byton’s senior designer, who formerly held the same role for BMW’s i brand.

At BMW, he designed the i8, an exotic roadster with butterfly-wing doors, driven by Tom Cruise in “Mission Impossible: Ghost Protocol.” But for the M-Byte’s exterior, Mr. Jacob showed restraint.

“We’re not trying to do something too fashionable,” he said. “What’s interesting for me is not how to design the bumper or the outward silhouette of the car but, instead, what can you really do in this car on the move?”

Byton created the vehicle with a low, thin dashboard shelf so the CinemaScope-style screen doesn’t obstruct the driver’s view of the road. The need for safety testing is obvious. A movie or other content can be shown nearly full display when the car is stopped, but it’s paused when the wheels start rolling — or goes dark when cameras detect the driver trying to watch.

Knowing how much content to deliver in which situations prompted Byton to build a user-testing lab resembling a drive-in movie theater for one. “In the driver simulation, we have a city that we’re driving through,” said Andre Nitze-Nelson, Byton’s director of future digital product. “We can try things and get a very high-level sense, ‘Oh that’s too complex. The cognitive load is too high.’”

During the afternoon of user testing, Mr. Theade, the fledgling Byton enthusiast, had trouble finding the pause button for a music selection. But he praised the car’s ability to display his day’s schedule of appointments and to flash news headlines on the giant screen.

“The industry is challenged to come up with new solutions,” said Mr. Jacob, Byton’s designer, on a phone call from Munich, where the automaker has its design studio. “But it doesn’t mean that now the industry has a lone single solution.”

Another compelling electric vehicle design, for a completely different context, is provided by Richard Kim, also a former BMW designer, who created the futuristic exterior of the electric BMW i3. In a sign of the times, he is also resisting passionate sports car shapes.

“Functional design is a bit anti-car,” he admitted. “What does a customer really get from a cool fender flare?”

Mr. Kim is now the chief designer at Canoo, a Los Angeles start-up that next year plans to introduce a car designed to be what he calls a “lounge on wheels.” It will be available not for purchase or lease — but only via subscription, with an all-inclusive fee.

The company’s business model serves the lifestyle of young urbanites who still want a personal set of wheels. “I don’t own a car anymore. I have a totally different set of requirements,” Mr. Kim said. “And I love cars.”

While Byton surrounds its passengers with screens, Canoo decided that the phone we already carry can serve as the vehicle’s primary interface. When docked in a cradle near the steering wheel, your phone waits like Siri for voice commands to lock and unlock doors, honk the horn, control music, or display the E.V.’s remaining range.

Other than your phone, the Canoo is screen-free. A minimal dot-matrix-style LED light bar indicates vehicle’s gear, speed and emergency functions.

Because the Canoo is all electric, it doesn’t need an engine bay or even a hood. So a low-mounted window up front gives passengers a curb-level view of the roadway ahead. All these measures, and the Canoo’s capsule-like shape, maximize the functional room inside.

“The front and rear seats are like living room furniture,” Mr. Kim said. “If you were to come home on your couch and you’re by yourself, you wouldn’t just take one seat and look forward. You’d kick your legs up and kind of sprawl out all over it.”

Canoo, initially called Evelozcity, was started in 2017 and is primarily funded by three individuals. Canoo did not disclose the amount of their investments.

The company plans to announce the price of its monthly subscription in mid-2021, about six months before introducing its vehicle.

A few months ago, I lounged in a prototype at Canoo’s headquarters in Torrance, Calif. I was joined by Ulrich Kranz, Canoo’s C.E.O. He was the BMW executive in charge of the i brand — the same skunkworks division that employed Mr. Kim and Mr. Jacob to imagine the urban car of the future. More than a decade later, the future is finally arriving.

The front seats are essentially reversible. When you slide the front seat forward and fold down its rear-facing option — as you would deploy an airplane jump seat — the entire cabin turns into a hangout space. Air-conditioning functions are ceiling-mounted, also as on an airplane. The company’s executives regularly hold meetings inside prototype vehicles.

Mr. Kranz explained the virtues of the Canoo’s low, flat electric powertrain under the floor. At BMW, the underlying powertrain was considered the “drive module.” The cabins plunked on top were called “life modules.” Canoo has plans for a lineup of cabins, designed as commuter or delivery vehicles, or for use in ride-share businesses.

“It can be used for all different top hats,” Mr. Kranz said.

The designers of the Canoo and the Byton M-Byte were both trained at the Art Center College of Design in Pasadena, Calif., where Stewart Reed is chairman of the transportation design department. The prestigious school is a mill for the world’s leading car (and now anti-car) designers.

“That’s also what makes it fun,” he said.

Mr. Reed also believes that a growing list of auto start-ups are finally breaking up the monotony of today’s roadway full of look-alike crossover S.U.V.s.

“I make the case for different kinds of tastes, languages, cultures, individual expressions, choices and freedom,” he said. “All those things.”

Responding to the divergent styles of Byton’s high-tech interior and Canoo’s loftlike cabin, Mr. Reed recalled the horse-drawn coaches of the Victorian era. They were personalized private spaces, designed for specific purposes and built by specialized coach-makers, only later to be joined to different powertrains — in that day, horses.

By Bradley Berman for The New York Times